That’s how Alessandro Bazzoni describes the origin of the name of Monteros so, currently one of the most powerful and strongest polo organizations in England, a goal he aimed always at.

To play in England is a dream come true for Alessandro.

Alessandro is an Italian businessman, a very nice and friendly man, who has been involved in polo for several years. Improving more and more not only as a player but also in terms of organization, from those days he played his first tournaments in the United States and Dominican Republic. It was in Dominican Republic where he met Cubi Toccalino. Monteros so has just finished their fourth and successful season in England. A season that had no less than two Monterosso teams playing the Queen’s Cup, in a year.. That had been really tough in all orders of life due to the COVID-19 outbreak, a pandemic that had put the British season in danger. 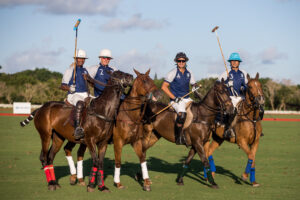 “I think we were able to make it because

We all pushed ahead together”, told Alessandro Bazzoni to Presa Polo. “The government, the HPA, all of them helped us a lot with protocols, safety measures, organisation and structures. With regards to Monteros, we have a large organization with more than 100 horses. So it was very important to have proper measures and protocols in order to avoid any risk for the people who work. We also worked together with Park Place and Guards Polo Club to make the stables safe and hygienic; I can assure that absolutely no one in Monterosso has been tested positive of COVID”.

Without doubts, Alessandro is very proud of the work his organisation has done. In such difficult times and mostly because his greatest concern was to be able to help. All those who make a living from the industry of polo and guarantee that all they would maintain their jobs. “Polo is an essential activity for a lot of people and families who make a living of it”, states Bazzoni. “There are a lot of people who do a hard job behind the players, who need to work. So it was necessary to generate enough income to pay them, give benefits to them and make sure they could maintain their jobs. This year, I got more than 40 visa endorsements through an office that only works on it”.

Did You Know That CBD Can Help You With The Arrival of The Coronavirus?

How To Watch La Clippers vs La Lakers...